OUR FASCINATION WITH CINEMATIC SEX

EYESKREEN REVIEWS LARS VON TRIER’S SEX EPIC NYMPHOMANIAC, CURRENTLY SHOWING AS ONE OF THE SIDE STREET FILMS AT EDEN CINEMAS, AND ASKS WHETHER THE FINAL CHAPTER IN HIS DEPRESSION TRILOGY DELIVERS.

I’ve no doubt that right now you’re most probably indignantly frowning at your screen damning my sick, insolent mind and going – ‘What nerve! I’m definitely NOT obsessed with sex! Unliking Eyeskreen once and for all.’ 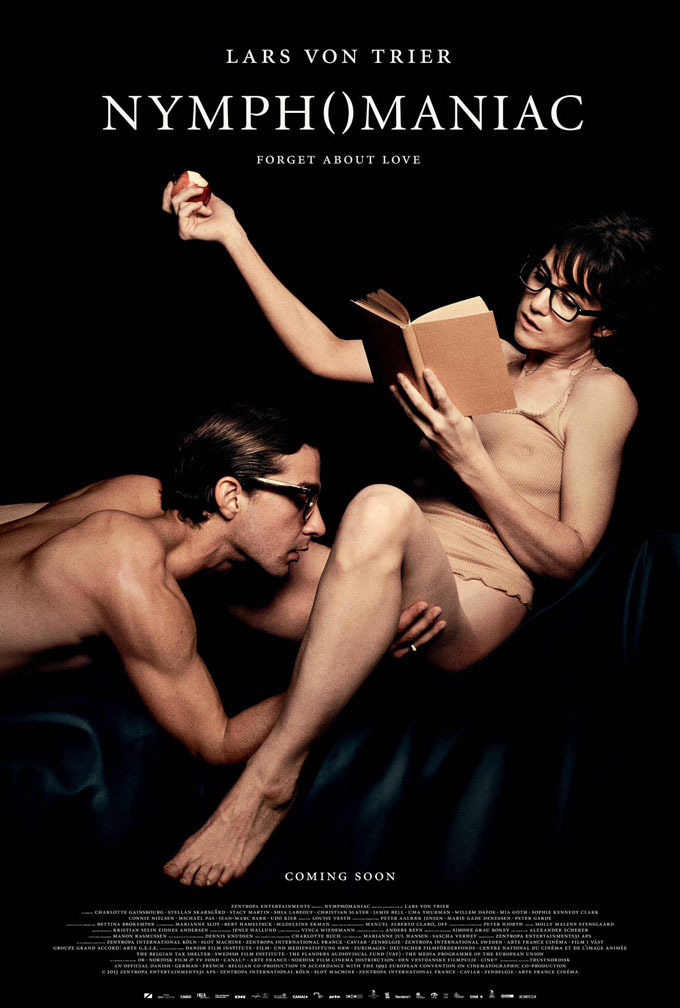 Whatever made you click on this weak attempt at a shock title for a review is probably the same reason you (and many others) would watch Nymphomaniac (Parts I & II) in the first place; sex sells unfailingly.

It’s no secret that sex & sexuality have always been fascinating to the consumer. Sex has always been a crowd puller. It is the one thing almost all of us can relate to in one way or another. It has been widely discussed, shunned and glorified since the dawn of mankind, and it’s potential surely hasn’t diminished over the years.

Sex addiction has also become a trendy subject which has been frequently returning to the big screen time and time again. Crash (1996), Black Snake Moan (2006), and more recently, Don Jon (2013), Thanks For Sharing (2012), and Shame (2011) have tackled this subject in different ways. Like most new von Trier films, Nymphomaniac(2013) promises to bring something fresh and unexpected to the table. Opinion regarding whether he succeeds in doing so, or if he’s simply become a master at pulling our leg, is divided.

The story is quite a straightforward one. A nymphomaniac (hypersexual woman) is found in an alley, bleeding to death by an unassuming man who we come to know simply as Seligman. He takes her to his home, puts her in his bed and sits down beside her to listen to her tale. The woman (unconventionally named Joe) describes her sexual adventures and ordeals in chronological order starting when she was practically a toddler. The events are recounted in an excruciatingly slow fashion – could be due to lack of chemistry between the actors, miscasting or simply Charlotte Gainsbourg’s interpretation of Joe. Every now and then, Seligman interrupts the story and comes up with various analogies between Joe’s story and fly fishing; most of which had a bizarre link, but felt so randomly concocted that they left me shaking my head in awe. 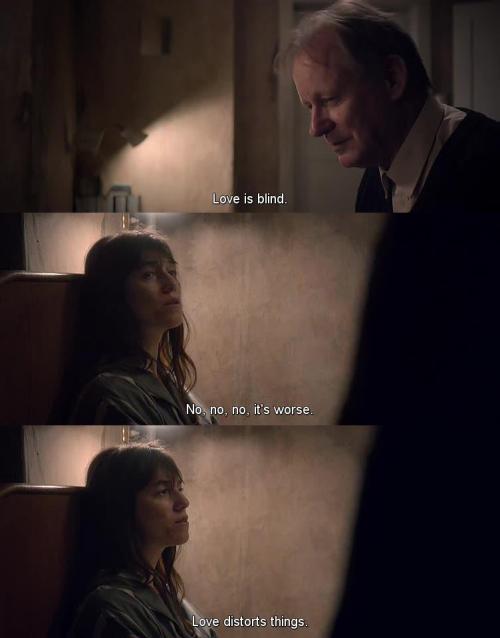 The film’s pacing felt weird; there really was no reason for the film to be so drawn out. Each scene takes an unfathomable amount of time to get the point across. At the end of part one, eye-catching clips from part two were spliced in (in “Stay tuned! Next time on Nymphomaniac” fashion), in order to lure the audience back for a second round.

The main character’s plight is, in my opinion, treated quite indelicately. Again, bluntness is a staple in von Trier’s work, so that much was expected. Thinking about it now, I guess the real shock was to actually see how long the protagonist’s pain goes on for.

Any emotional depth lacking in the characters was balanced out by Joe’s assertiveness. At one point she adamantly refuses to be labeled a victim and ‘sex addict’. “I am a nymphomaniac,” she says, fully embracing her identity in the face of the society which shuns her because of it.

Nymphomaniac most probably is Lars’s most commercial attempt to date, with its themes more clearly spelled out than his previous films. The content may be heavy and at times, blatantly presented in typical von Trier manner. At a first viewing, it didn’t inspire an in-depth reading into as Antichrist (2009) did; perhaps because the subject matter is so in-your-face. It also felt like the narrative that makes up Nymphomaniac was effortlessly stitched with a plethora of sex-related clichés; from the stereotypical black men’s foot-long dongs, to giving blow-jobs to strangers on trains – a recycled idea from Breaking the Waves (1996).

As those close to us can testify, here at Eyeskreen we are quite the von Trier devotees. We have, in fact already dedicated three posts to his films Antichrist (2009) and Melancholia (2011), and even one named Lars Von Trier’s Nymphomaniac: 10 Things to Know. Debuting two years after Melancholia, this film (I consider both installments different parts of one film), brings Lars’s Trilogy of Depression to a fitting end.

The first part, Antichrist is one of my favorite films, one I had no trouble watching four times over the span of four years, and which I discussed in detail in an earlier post – Antichrist: Of Destroyed Genitals and Haunting Imagery. It was the first von Trier film I had watched, and basically, which got me hooked on the man’s quirky storytelling methods and compelling style. I loved how unpredictable his material always was, how gripping the stories were and how the characters felt even more real than a few I know in real life! Von Trier had found a recipe that worked, and fantastically at that. This was why I was so keen on watching Nymphomaniac. Another reason was that this film promised to reunite Charlotte Gainsbourg and Willem Dafoe, whose explosive chemistry together was why Antichrist worked so much, in my opinion.

Nymphomaniac’s ‘Production Still’ depicting all the main actors & actresses, with a ‘censored’ Von Trier on the far left

While we’ve no doubt that the strongest and most provoking of Nymphomaniac’s imagery could be metaphors for bigger truths, nothing clearly separates the metaphors from the sequences that should be taken literally. One particular scene feels like an inside joke between the director and his fans; his re-visiting Antichrist’s opening scene, Lascia ch’io Pianga and all. While this may provoke viewers to facepalm… the ‘joke’ might have never been intended in the first place. Lars could simply be using the scene to gel the three chapters together into one solid, depressive volume. Antichrist, Melancholia and Nymphomaniac are, after all, meant to be three separate parts of one trilogy. There are numerous references to von Trier’s other work throughout the film.

Von Trier is generally known as a master of provocation. He’s the one who taught us to question the movie-going experience, and what’s more, the movie industry itself. Most of his films offer a moment (usually a particular moment in the film or incident in the story), which permanently stays with us. I imagine that most of us collectively remember The Idiots (1998) by one mental image and Antichrist (2009) by another. Unforeseeable powerful imagery, however crudely presented, is many times prevalent to von Trier films, and effectively so. What could von Trier utilize to provoke nowadays? Provoking is not so easy to do anymore. If he decided to bash organized religion, it wouldn’t have the same effect that it had back in the 90s. Genital mutilation and male rape wouldn’t be as effective the second time around. Does von Trier feel it necessary to push the boundaries with each of his films? I have mixed feelings about some of the visual imagery utilized to tell the story. I was, for example, rather non-plussed about one close-up shot of a vulva rotating and transitioning into an eyeball. While there was nothing particularly shocking about that shot in itself, it did feel like a blatant attempt to shock. My impression could have been further reinforced as, out of the four-hour-long extravagant affair that is Nymphomaniac, this particularly brief one made it to the (initially banned from youtube) trailer. Von Trier actually promoted Nymphomaniac, which no doubt is intended to carry greater weight than, say, Deep Throat (1972), using such material.

Not as strong stylistically?

In Nymphomaniac we’re bound to expect the unexpected, from the title card (for once, oddly neatly typed rather than furiously scratched out). Even though his style has been repeatedly imitated , a von Trier film is usually easy to identify as such. With Nymphomaniac, his auteur ship and distinctive style weren’t felt as much. There is a heavy clinical and unsure feel throughout. Editing wise, the film feels messy. Cross cutting, montages, bleached black and white ala the Antichrist intro…they all made the final cut.

Von Trier’s films usually have an unsettling, heavy aura around them and the other two parts of the Depression Trilogy also have a haunting, dream-like visual quality to them. Nymphomaniac’s rather drab look rendered it tiresome and tedious. While it could be argued that the film’s look is meant to reflect Joe’s emotional hollowness, it could also be said that Melancholia and Antichrist also have hollow and disturbed protagonists. They must have been easier for me to watch because whenever the subject matter got too dark, the imagery was still fascinatingly beautiful. Nymphomaniac has a dark, heavy vibe throughout, and Joe’s world seems as suffocating as her situations.

The dialogue was extremely difficult to listen to with a straight face. In fact, I believe that most of the shortcomings I would have otherwise blamed on the acting can be attributed to the overblown screenplay. Joe, the storyteller, speaks in such eloquent prose (albeit the occasional ‘cunt’) that she constantly seems out of character with the brash, vulgar nymph we see in the flashbacks. She talks as if her dialogue was lifted off an unabridged Victorian classic. She nonchalantly muses, “Perhaps the only difference between me and other people is that I’ve always demanded more from the sunset. More spectacular colors when the sun hit the horizon. That’s perhaps my only sin…” The most cringe worthy line had to be when – SPOILER ALERT – she was witnessing her father succumb to his illness. We view her father’s peaceful face from between her thighs, down which one solitary glistening drop trickles down. “I… lubricated,” she recalls in voiceover.

Seligman, on the other hand, seems totally disinterested in what the nymphomaniac has to say and seems to be using the time to think about what he’s next going to say about fly fishing. Why he makes her continue her story to completion is a mystery to me. Usually, as surreal as the situations of von Trier’s characters are, the characters themselves always come across as hyper-real. Watching their descents into darkness, I usually feel much more a participant than a viewer. For me, that is what makes a von Trier film disturbing, yet almost addictive. This isn’t the case with Nymphomaniac. The characters never felt real at all. Most of the time, it feels that director and actors are treating the project as a long, laborious joke.

A Reason to watch Nymphomaniac

Contrary to what was said by a substantial number of critics and casual commentators, the film isn’t pornographic and it certainly doesn’t aim to excite – or to glorify sex. When you think about it, no von Trier film actually glorifies sex. In all of his films, the human sexual experience is very animalistic in nature – and sex being such a prominent issue in his films, hence their dismal vibe. Nymphomaniac never glorifies the addiction, but in similar fashion to Breaking the Waves, lets us voyeuristically pry on the spiraling downfall of the victim.

Even though it could be his most mainstream attempt to date, Nymphomaniac doesn’t quite cut it as a drama because of it’s unpredictable, despite monotone, character. The pseudo-pornographic parts were way overhyped and generally did not add anything to improve the film. More emotional depth and relatable characters would have made it much easier to watch in it’s entirety. As would have a solid sense of direction. It must be noted here that this was not the film originally intended for wide distribution by Lars. What we have seen (and what is available to this date) is the producer’s cut of Lars’s vision…some one and a half hours shorter than Nymphomaniac was originally intended to be. Do come back to read what we have to say once the Director’s Cut is out, whenever that might be!