The Rhythm to The Melody Line took place at St. Agatha’s Auditorium on the 8th of February 2019, with a second concert at Oratory Don Bosco, Gozo on the 23rd of March. Supporting him on stage were the Zone 5 band, a colorful collection of friends Fr.Karm has kept close to his heart for the last 30 years (or thereabouts). 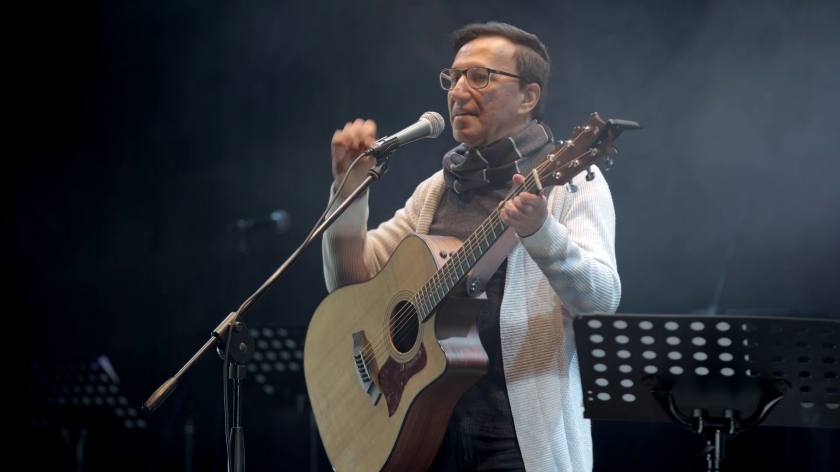 It would be futile to attempt to comment on the concert experience as if it were any other concert by any other artist for one reason; Fr.Karm is by far and large no ordinary person, and no ordinary priest for that matter. Most topics which most religious people address in harsh tones of black and white, he approaches in tones of grey. His theological perspectives are always fresh and habitually different from what we’ve probably heard before. While he’s talking about God, he is actually speaking about about the constant voyage we’re on called life.

‘(Fr.Karm) jafni ħafna iżgħar u ħafna irqaq!’ quips the proudly roundish figure of Andrew Cauchi, himself a veteran and staple of local Christian Praise music as he carries a stool on stage to join his old Maranatha brother for a charged performance of Imxi Warajja Illum mid-concert. 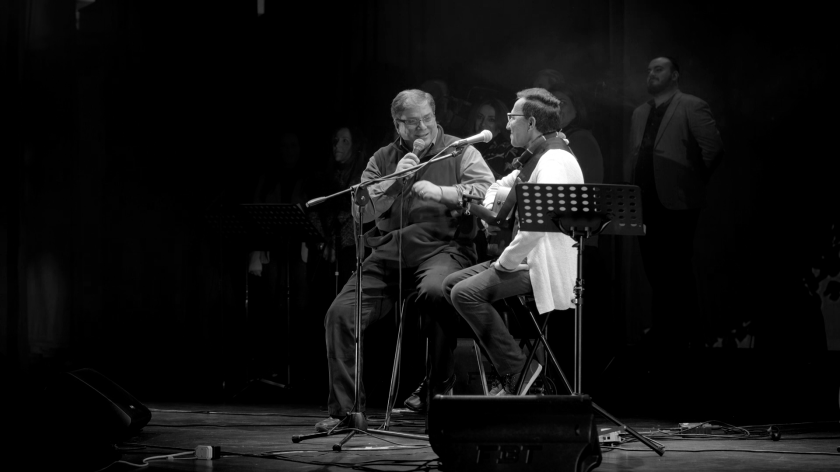 ‘Imma int ma nbdiltx!’ Cauchi concludes. Feigning embarrassment, Fr Karm says nothing but blushes and nods at the audience. He really hasn’t aged that much throughout the years, and something about the way he conducts himself day after day tells us this sprightly, smiling priest with the guitar isn’t just lucky in the genes department, but perhaps keeps himself young in another way. Any one of us who work and live with him day in, day out can attest to the positive aura that seems to accompany him with every step he takes.

In order to better understand how, at the young age of 58 this man appears to have a handle on the most fundamental issues most of us struggle with day in day out, I had a short chat with Fr Karm a few days preceding the concert. I started by asking him the question which I thought defined what to me, is the fulcrum his songs. Most importantly, why is he always going on about this ‘journey’ he’s on? Doesn’t he think of anything else? When will he have enough? 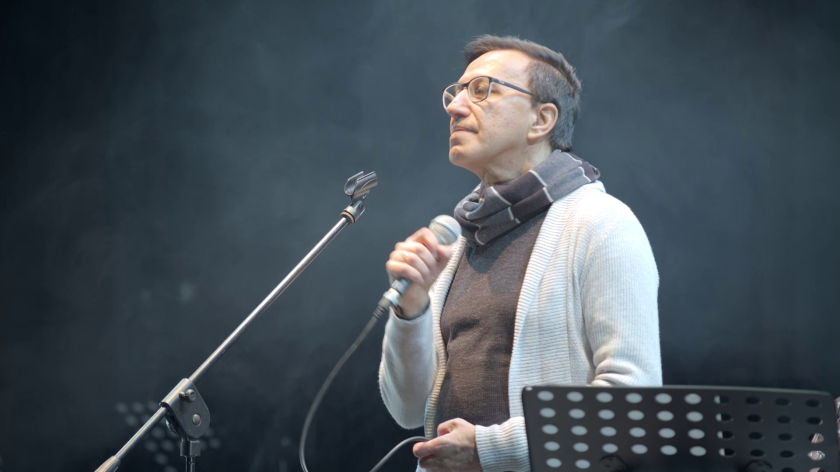 Karm: God’s presence is always there. Even if you don’t recognize it, it is there in different ways. I think this wish to embrace God’s presence is present in all of my songs. But the most recurrent theme in all of my homilies, talks and songs is the walk – the voyage or journey. So the concept of searching and journeying go hand in hand. Our aim on earth is to be on this journey.

‘Searching for what?’ I ask. For Fr.Karm, the journey seems to be an aim in itself and I find this thought daunting, to put it mildly. Its definitely not an easy or conventional approach towards life. I mean: who in their right mind wants to keep on searching without respite? To walk for the sake of walking?

It is evident in his songs that he knows the destination he is walking towards – as Imxi Warajja Illum directly implies. This song is easily the highlight of the whole concert. A gorgeous rendition carried by the duo’s tight harmonies and the band and choir’s undeniable chemistry. 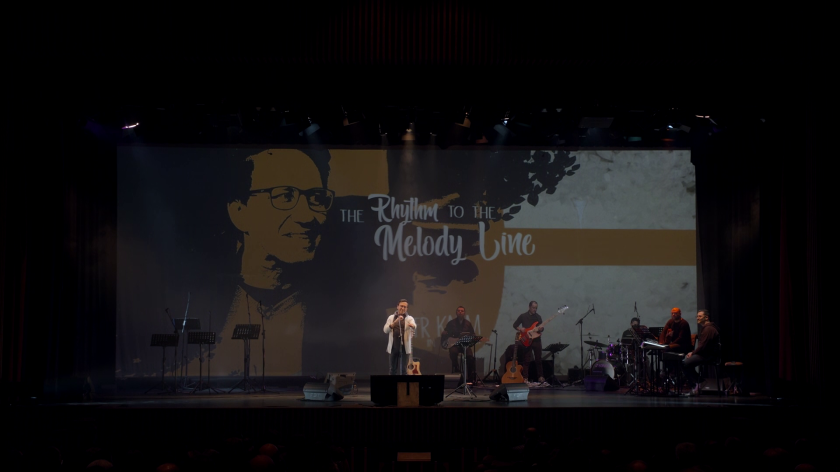 During our same talk, we touched on other themes that frequently crop up amongst the most pertinent dilemmas humanity faces and which I was intrigued to hear his thoughts on. He sings more love songs and shows more yearning towards one person than most probably any other artist did towards any other muse. To put it in perspective, Pattie Boyd had three songs written for or about her; Something by George Harrison (her first husband) and Layla and Wonderful Tonight by Eric Clapton (her second). God had at least 93 original songs written or composed about him by Fr Karm, which automatically shows that God and himself have a lot going on between them.

This begs the question ‘If God exists and is ever present, where is he when he can’t be felt?’

Fr.Karm isn’t phased in the least. God takes you through the tunnel of darkness and he does this purposely. He leaves us in darkness because we need to be there – when you place darkness and light against each other and experience one through the other…that is the mystery of faith. Not when you’re in between the two states. You can experience the power of light only through extreme darkness. Dark and light. Death and Life. Jesus born in the Eucharist. That’s it. God places you in a dilemma… and tells you to deal with it. That’s all he does.

‘So…when children get sick…’ I interject. ‘Why should a small child contract meningitis?’ he cuts in. 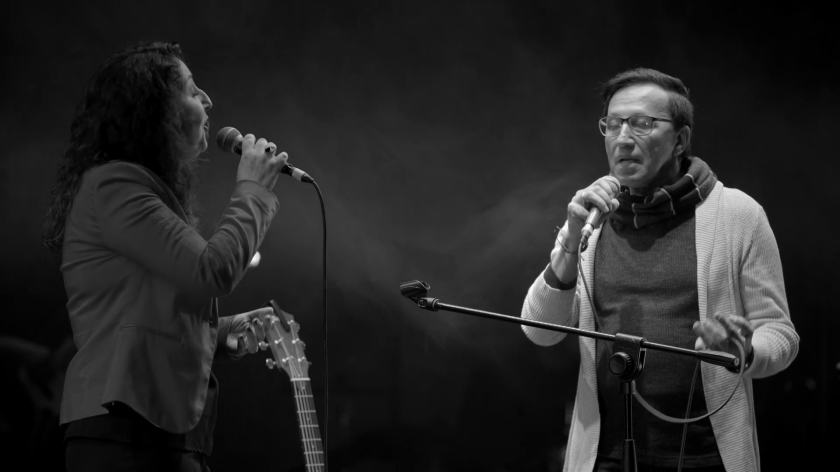 Karm: Because meningitis is a part of life. It is also coming from what God created, which is all good. If you look at the microbe on its own, there is sickness. However, if you combine the pain the microbe brings with it with other ingredients, there is true healing.

Pain and suffering along with the other reality heal you and help you live a life to the full. This is beyond our knowledge and understanding, although there are those who have experienced it. Famous mystics have been able to take these obstacles and just say all is well – all will be well. Whatever happens.

Although he knows that what he’s saying isn’t at all easy to grasp, Fr Karm speaks assuredly. It is with this knowledge about the person that one can gain a better appreciation for the artist and the songs.

The song Imla ‘l Qalbi shows us a Fr.Karm that doesn’t want anything else but a relationship with God – ‘Imla ‘l qalbi bik u xejn aktar.’ It also says a lot about the person and the MSSP mission and way of life. Who can really live without succumbing to materialism’s pull? In a way, its’ message echoes John Lennon’s Imagine. 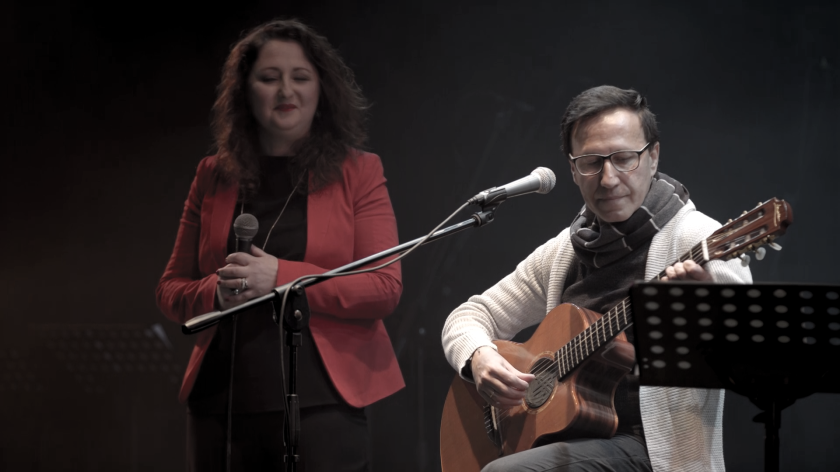 Fr Karm’s core message comes through clearest when addressing the audience right before the fourth song, Mulej Nafda Fik.  ‘Il-mixja tieghi hi kemm bdejt nitghallem bil-mod il-mod nafda f’Alla,’ he tells the audience.  This theme of walking…of journeying without end is so important to him. During our previous conversation, we had also gone into detail on this topic. It gave me insight that a two minute song doesn’t allow.

Karm: I was once criticized by a Dominican priest for the fact that I had stated that you will never attain God. And its’ true, you never will. God would be a puppet if he lets you attain him fully and completely. You can’t have him in your pocket and control him. God can never fully fill your life. He fills my life in this precise moment. Afterwards I realize that I need more. There’s always a need for more of God…there’s never enough. If today I think I’ve reached fulfillment, tomorrow’s meditation will show me a new God, a God very different to the one I met yesterday.

Words that can easily confuse. They make me realize I myself may have misjudged Karm, assuming through reading the lyrics to his songs that he wanted to prove attainment of God.

Karm: That’s why the walk is so important. You can never say you’ve reached the destination. Discovering God is a journey…I already found you, you are everything for me and I want nothing more. But I’m still far away. I will never be ready, not even in eternity!

Again, this goes against one of the fundamental ideas I was taught in chatachism. What about meeting God at the pearly gates and finally finding respite from all the toil and suffering of this life…and from all the walking? What about resting forever from a safe place far, far away? 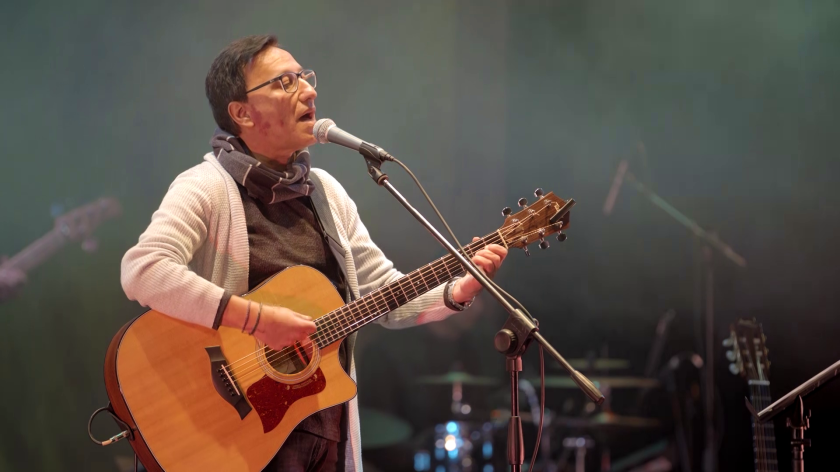 Karm: I will continue growing in eternity. What’s the point of walking and growing all my life on earth and never walking again? We will always continue to grow. That’s why my only point, my only focus is the voyage. Everything I do needs to reflect this.

Fr.Karm Debattista has such a vast body of work that it wasn’t really a surprise that this concert omitted his most famous contribution to Maltese Praise and Christian music, the Christmas classic Armonija from his first album, Fittixtek. After our discussion, I couldn’t help but replay it’s refrain in my mind and realizing that, ever since he first started his performing in the 1990s, in almost all of his songs Fr Karm has really been trying to say the same thing; God is found by searching for him and by wanting to find him. And he’s found in the most commonly misplaced but at the same time, easily attained locations – love. All else simply serves as distraction.

The third and final highlight of the concert was without a doubt, Nizfen Ghalik, during which the MSSP priest skipped and pranced on stage in an adorable performance I don’t think anybody really expected or is likely to witness again.

Unless you catch the The Rhythm to the Melody Line on TVM2, Easter Day at 3.15pm. 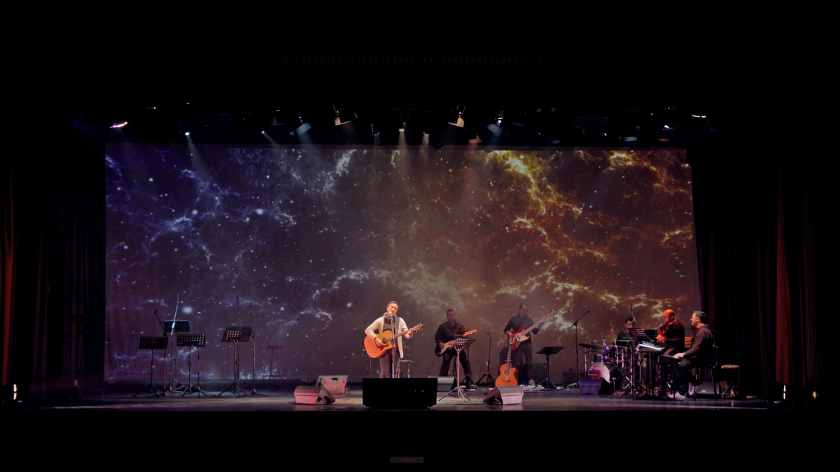 For more information about Fr Karm and his albums, feel free to visit his website.

One thought on “Fr.Karm Debattista: The Rhythm to the Melody Line”