Hunting Cain is a spanking new Rock entity. Yesterday being frontman Steve Farrugia’s 500th day of Summer with the band, they marked the event with a particularly interactive rock show at Funky Monkey. We were there for two reasons. Firstly – to enjoy and celebrate the birth of a new band – this was actually their first proper gig as Hunting Cain. The other time I had the opportunity to watch them live was when they still called themselves The Unknown Project. Secondly (or maybe firstly) – to support our brother Kevin – during the show, Steve made it crystal clear that everybody loves Kevin! Kevin’s the drummer, in case you’re wondering. Responsible for keeping the band tighter than a – badumm-tss! There was some of that going on during the show as well. 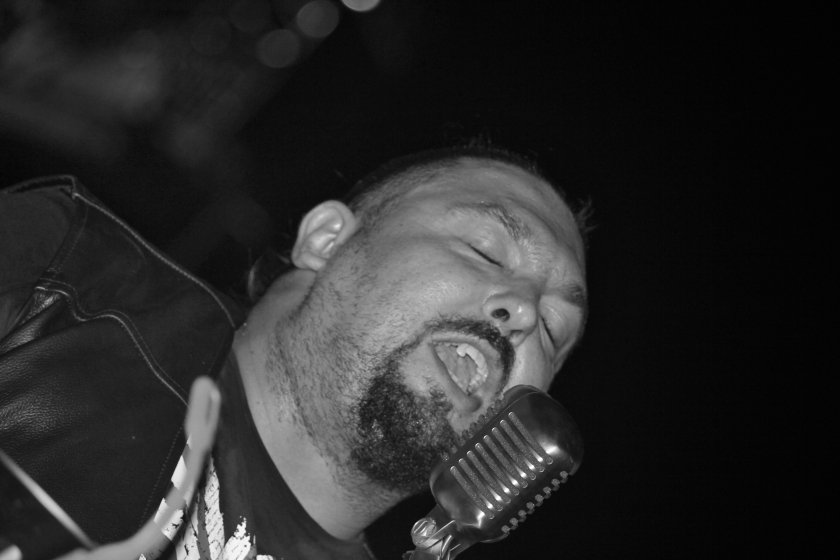 Yesterday’s show was a vast improvement over the one I attended back in their U.P days. They’re looser (we’re speaking nervous systems now), and much more confident. They act as a machine – as a unit. Steve, enormously talented big man with a shimmering timber in his voice that harks back to the rock n’ roll gods of way back when. Can’t help but compare the man’s voice to Axl Rose’s and Nazareth’s Dan McCafferty. Yes, he has got those pipes.

Staying true to his title, the frontman gives Hunting Cain a voice even between tracks, doing his best to inject humour in an attempt to help a new audience warm up to the band. The obviously unrehearsed (and sometimes very politically-incorrect) banter in-between tracks was enjoyable to watch as the fans got to know the band a little bit more intimately during these moments.

Steve may come across as fast and loud, but there is also a genuinely nice guy not too deep beneath the surface. Which isn’t something to be taken for granted, when you live and breathe rock n’ roll as Steve seems to do. His self-deprecating humour was a joy to observe, a touch of humility that is again, not to be taken for granted. I mean, how many rock and roll frontmen would nonchalantly admit in front of their audience that they have no idea what a particular song was titled?

Mainly responsible for the vocals, he played rhythm guitar on a couple of numbers, letting us know beforehand that, ‘This is the only song I know how to play guitar on.’ Freddie Mercury did the exact same thing when Queen played Wembley. ‘This guitar only knows three chords,’ he said, or something on those lines. And the audience loved him for it. Even with this small (most probably unintentional) hint of a nod to such rock icons, Hunting Cain showed that they truly are rock and roll in spirit. They then serenaded the audience to a House of the Rising Sun they made their own, impressing us with Steve’s gravelly vocal and Tom’s expertly played guitar solo.

Tom is the band’s quiet one. Playing lead guitar, he lets his fingers do all the talking, handling each piece with ease and passion. Yesterday the audience was informed that he writes all of the band’s material, mostly inspired by lovers’ tiffs. Although we’re sure Steve just made the second bit up on the spur of the moment. Christian Bale’s doppelganger (from a number of angles at least), Tom’s verve for the whole project is evident. James (or is it Jelly?), is Hunting Cain’s bassist. And (according to what we managed to observe yesterday at least), the second, quieter front man of the band. The banter between Steve and himself oozed chemistry between the boys which was enjoyable to observe. It worked, even if the audience was a tad too indifferent initially. Keeping in mind that yesterday’s show was our official introduction to the band and so anything they did was untried and untested, James and Steve managed to hold our attention in-between tracks (and even made us enjoy them as much as we did the performances themselves). Apart from his wry sense of humour which seemed to gel well with Steve’s boisterous persona, James’ melodic bass-playing skills filled each song with exquisite extra texture.

And then there’s Kevin. Drummer from hell. What more can I say?

Hunting Cain comes across as a band which doesn’t take itself too seriously. But that is exactly why we need to take it seriously. We can never have enough honest rock and rollers. They’re in it for the love of what they do; and that in itself is commendable. So every little bit of help and exposure helps. I’m obviously adressing the media here – or anyone who ownes a camera and a keyboard, like myself.

I’ll update this page with news for upcoming HC shows the instant I get wind of it. I really do hope a real journalist or two to make it and cover the story as it’s unfolding. Because Hunting Cain deserve it, and they’re just getting warmed up.